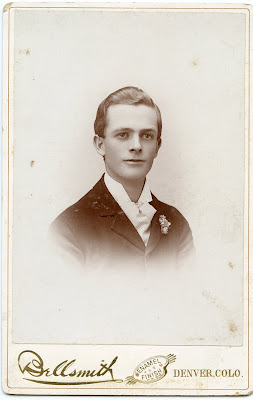 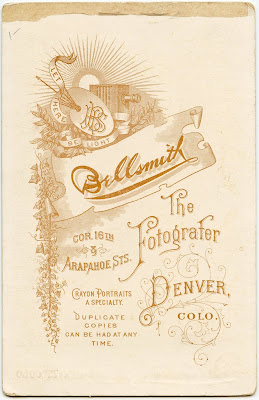 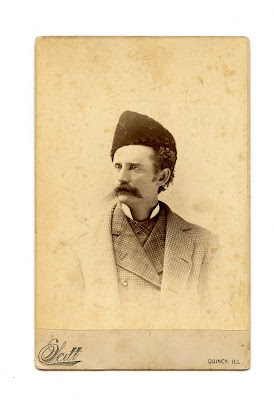 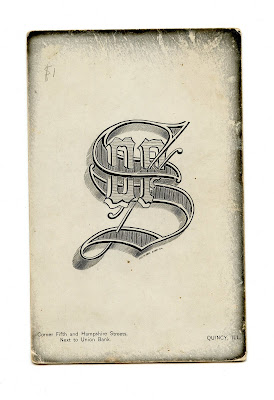 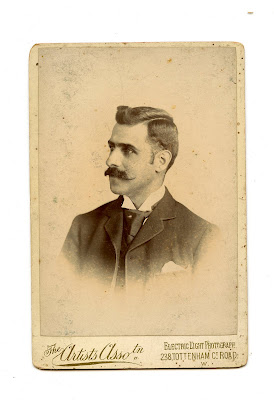 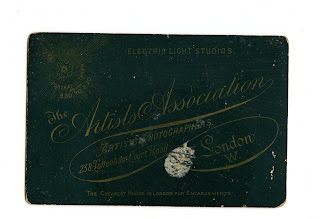 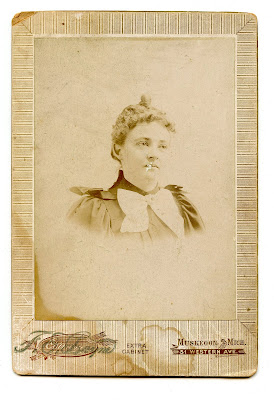 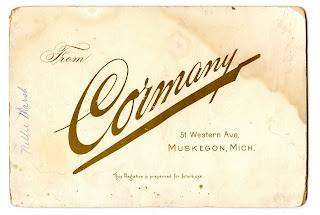 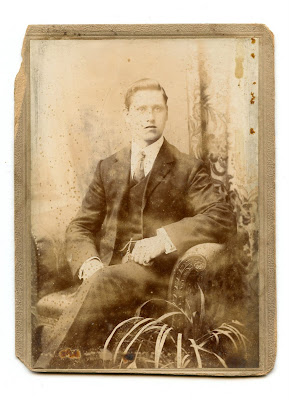 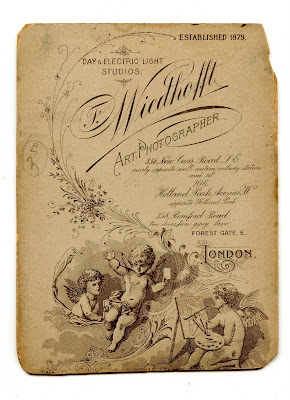 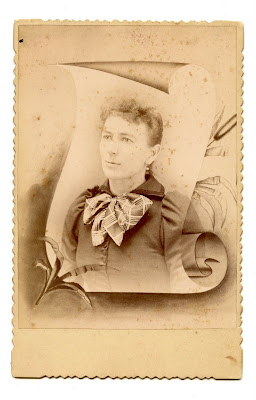 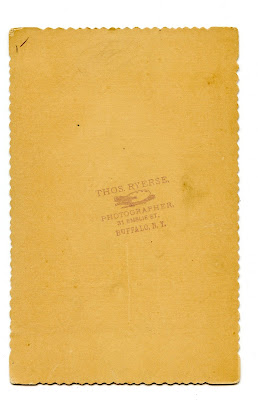 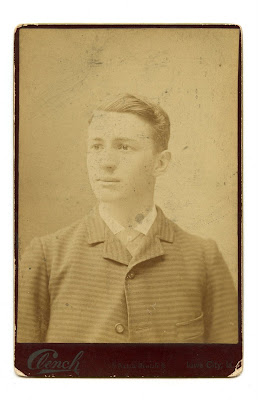 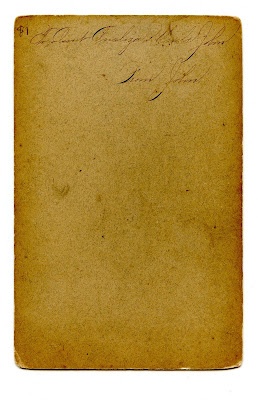 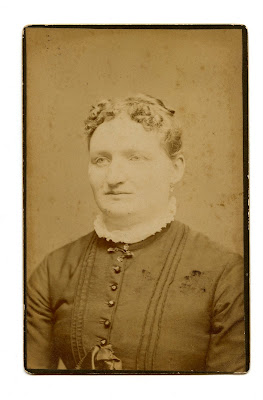 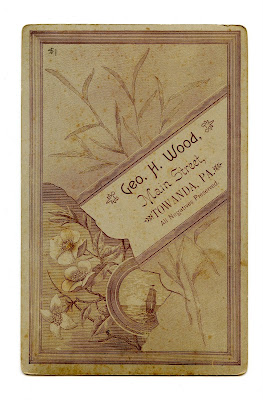 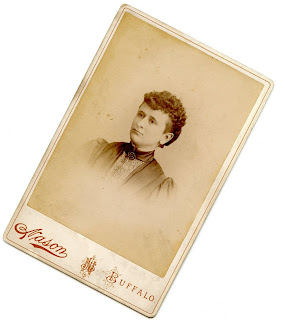 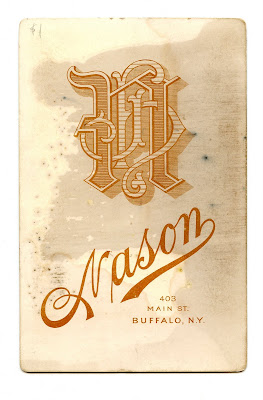 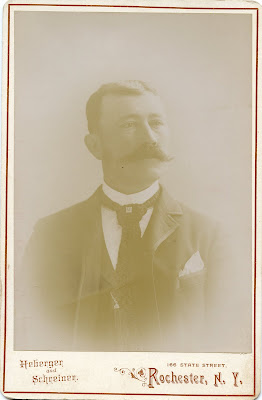 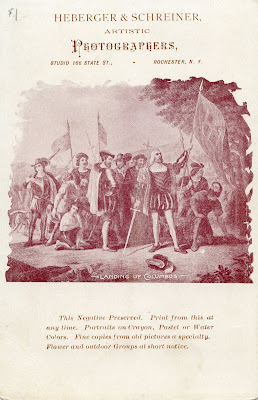 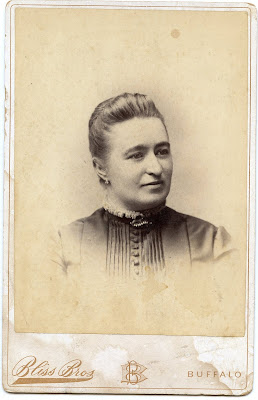 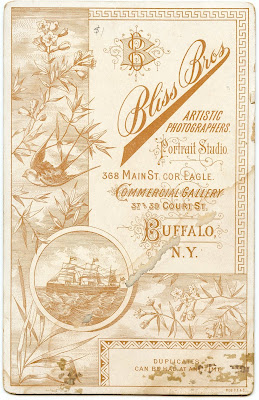 
The Carte de visite process was quickly replaced by the larger Cabinet cards. In the early 1860s, both types of photographs were essentially the same in process and design. Both were most often albumen prints; the primary difference being the cabinet card was larger and usually included extensive logos and information on the reverse side of the card to advertise the photographer’s services. However, later into its popularity, other types of papers began to replace the albumen process. Despite the similarity, the cabinet card format was initially used for landscape views before it was adopted for portraiture.
Some cabinet card images from 1890s have the appearance of a black and white photograph in contrast to the distinctive sepia toning notable in the albumen print process. These photographs have a neutral image tone and were most likely produced on a matte collodion, gelatin or gelatin bromide paper.
Sometimes images from this period can be identified by a greenish cast. Gelatin papers were introduced in the 1870s and started gaining acceptance in the 1880s and 1890s as the gelatin bromide papers became popular. Matte collodion was used in the same period. A true black and white image on a cabinet card is likely to have been produced in the 1890s or after 1900. The last cabinet cards were produced in the twenties, even as late as 1924.
Owing to the larger image size, the cabinet card steadily increased in popularity during the second half of the 1860s and into the 1870s, replacing the carte de visite as the most popular form of portraiture. The cabinet card was large enough to be easily viewed from across the room when typically displayed on a cabinet, which is probably why they became known as such in the vernacular. However, when the renowned Civil War photographer, Mathew Brady, first started offering them to his clientele towards the end of 1865, he used the term, "Imperial Carte-de-Visite." Whatever the name, the popular print format joined the photograph album as a fixture in the late 19th century Victorian parlor.
Ironically, early into its introduction, the cabinet card ushered in the temporary demise of the photographic album which had come into existence commercially with the carte de visite. Photographers began employing artists to retouch photographs (by altering the negative before making the print) to hide facial defects revealed by the new format. Small stands and photograph frames for the table top replaced the heavy photograph album. Photo album manufacturers responded by producing albums with pages primarily for cabinet cards with a few pages in the back reserved for the old family carte de visite prints.
For nearly three decades after the 1860s, the commercial portraiture industry was dominated by the carte de visite and cabinet card formats. In the decade before 1900 the number and variety of card photograph styles expanded in response to declining sales. Manufactures of standardized card stock and print materials hoped to stimulate sales and retain public interest in card photographs. However, as with all technological innovations, the public increasingly demanded outdoor and candid photographs with enlarged prints which they could frame or smaller unmounted snapshots they could collect in scrapbooks.
thanks wikipedia
Posted by .kara. at 8:24 PM No comments: